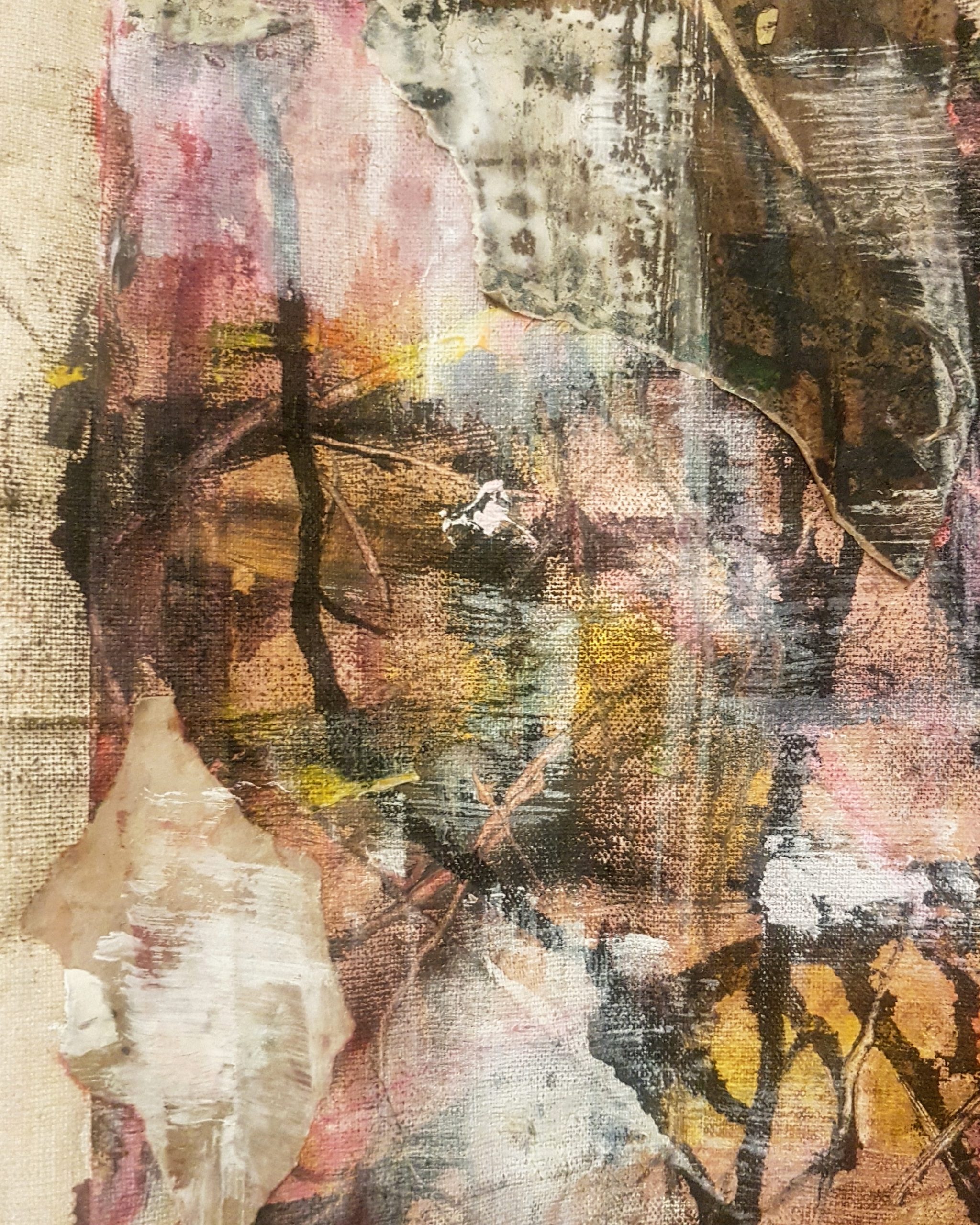 Quite a bit of what you sent us seems to have been produced in recent months, so I guess you’ve been productive in a generative sense during lockdown, I was wondering if you’d tell us a bit how you’ve been looking at art?

You’re right I was extremely productive during lockdown as I was working towards the completion of my Honours Degree in Contemporary Art Practice. Despite the disruption to previously thought out plans, and no access to studio space, I had to keep working and stay focused no matter what.
I’ve always been fascinated by the geological history of the Scottish landscape, the way it’s been sculpted over a time span of billions of years, by a series of different plate tectonic events. So visiting All the lochs, mountains, and coastal areas of Scotland which have such a wide diversity of rock types was the initial starting point for my latest body of work. As lockdown progressed my concept became more philosophical and my thinking more metaphorical. I began to develop a deeper understanding of, what I wanted to communicate from my work and started to make a connection between the rocks I had been studying as a visual metaphor for the fragility of Human life. 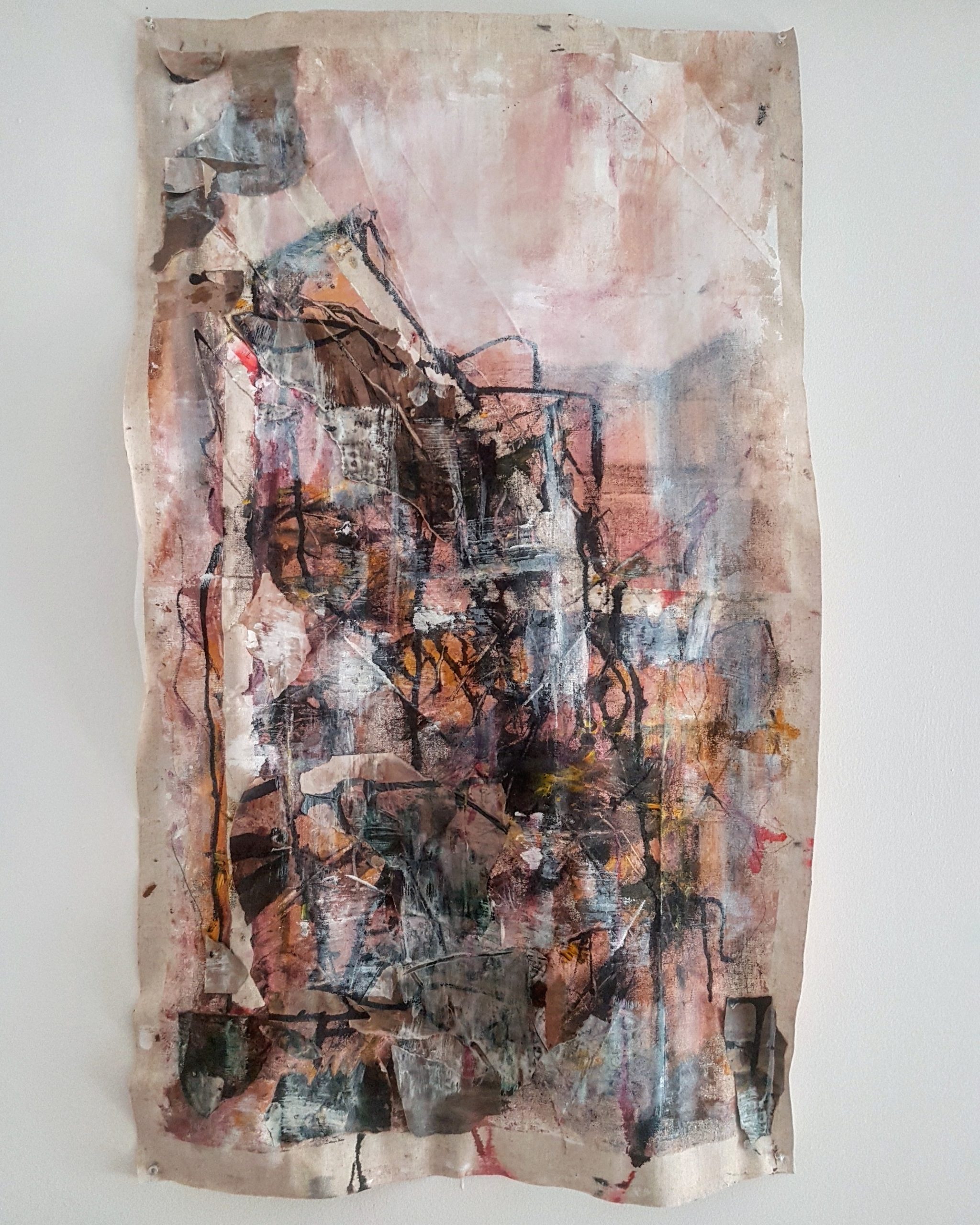 We were always asking people what exhibitions they had seen lately, but there weren’t really exhibitions for most of the year. Did you see anything online that you’d like to recommend? Or offline in some other way, murals for example?

Well since you’ve asked me that question, I would first like to recommend you visit the Degree Show of myself and fellow classmates. The show went live back in June but can still be viewed by clicking on this link, and hopefully a physical Degree Show will take place later in the year.
As soon as lockdown restrictions were eased I spent a few days in Liverpool and made a point of visiting The Tate Liverpool, which was really fantastic. One of the paintings currently being exhibited here and that really touched me is ‘No Woman No Cry’ (1998) by  Chris Ofili. The painting is dedicated to Doreen Lawrence, the mother of Stephen a strong matriarchal figure who never gave up hope that justice would be done. Each of the tears falling from the eyes of the woman in the picture contains a tiny photograph of the murdered boy. 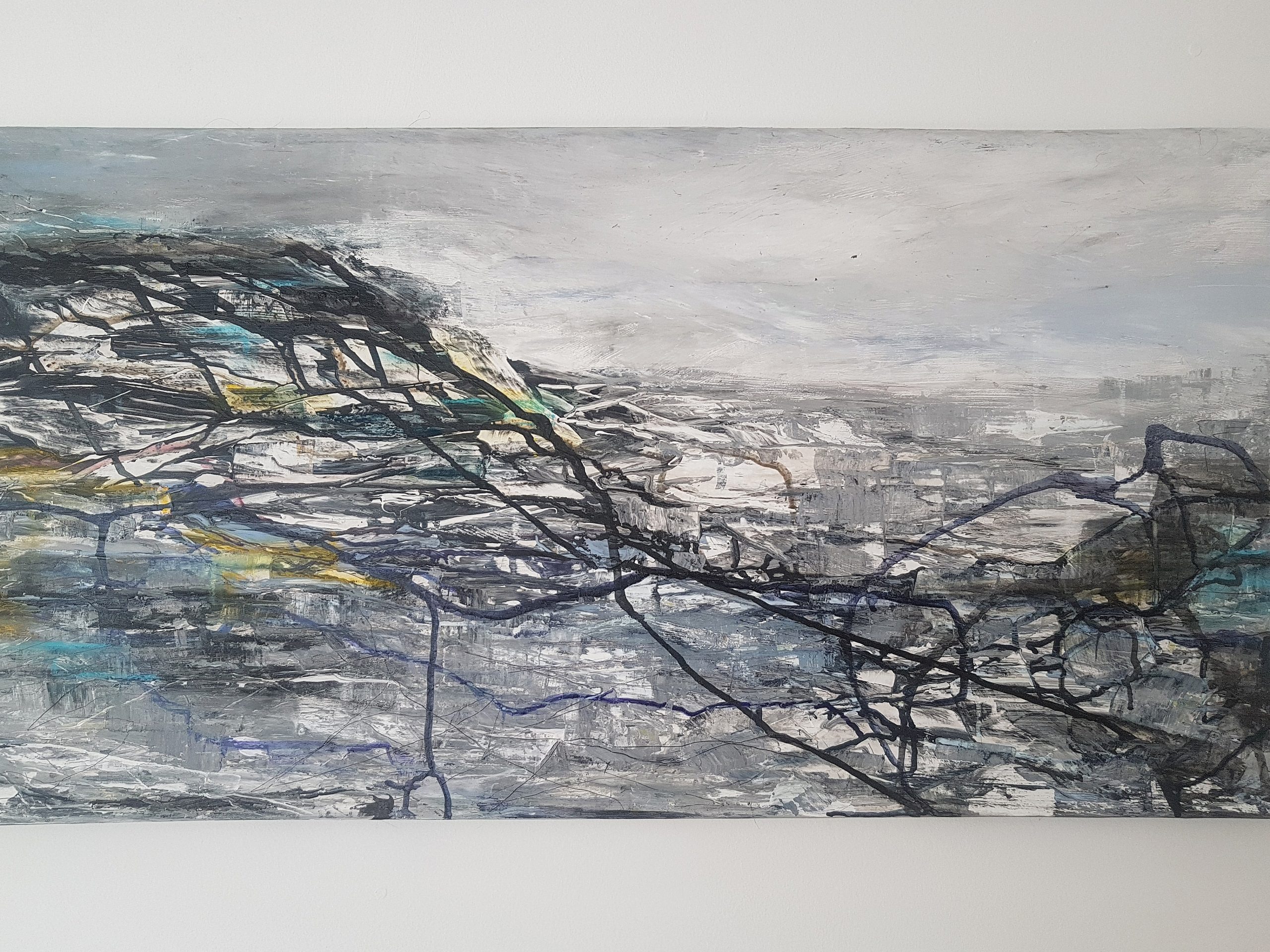 Could you tell us a bit about your process? You said that you’d leave paintings out of doors and let the elements affect the surface and that this was a bit disrupted by quarantine, would you talk about this a little, if there’s something durational or preformative about this kind of process driven abstraction?

Getting outside and visiting the locations that interest me has always been an important part of my process. I think there’s a different energy to work that’s been created outside as opposed to work made indoors, with only digitally sourced images for inspiration. Through the process of visiting a location and submerging myself into my environment, I use my senses to fully absorb everything around me and it all emerges from there. I hope to communicate an awareness of place through my work sometimes as site responsive art installations, paintings or sculptures which yes do very often have a performative aspect to them. Leaving the paintings outdoors was a way for me bring the outdoors indoors during lockdown, allowing the elements of nature to interact with my work, whilst documenting the changes through film and photography as the days went past. I guess it was my own personal creative loophole around the restrictions of how far we could travel and how much time we could spend outdoors. 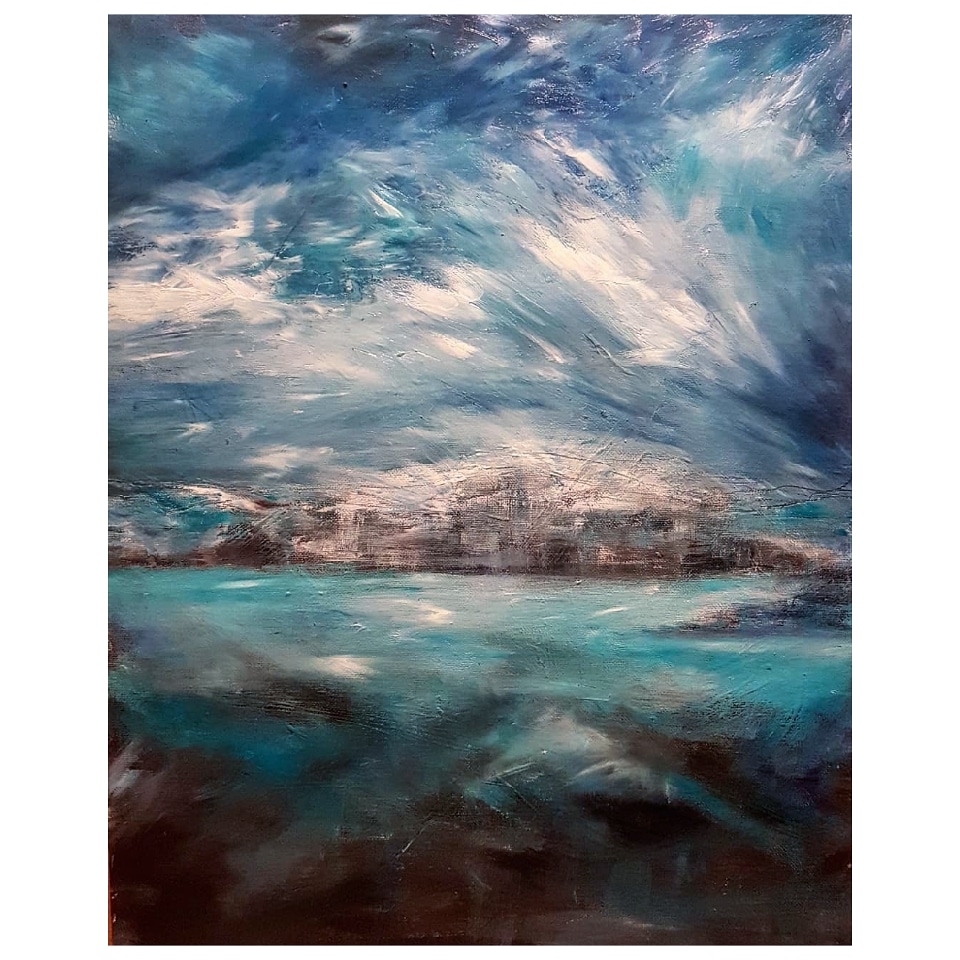 DUENDE’
Oil on canvas board

I wonder if you’d tell us a bit about titles, I noticed you used a bit of Gaelic for one of them. Do you suppose your work has a place in a specifically Scottish branch of art history?

I’ve never really thought about my work as having a particular place within a branch of Scottish art history. For me using Gaelic in some of the titles just feels more honest to what my arts about in terms of peeling back the layers of the geological history of Scotland and peeling back the layers of ourselves to reveal our deepest truths. I think the more time we spend outside and connect to nature the more we connect to our authentic self. 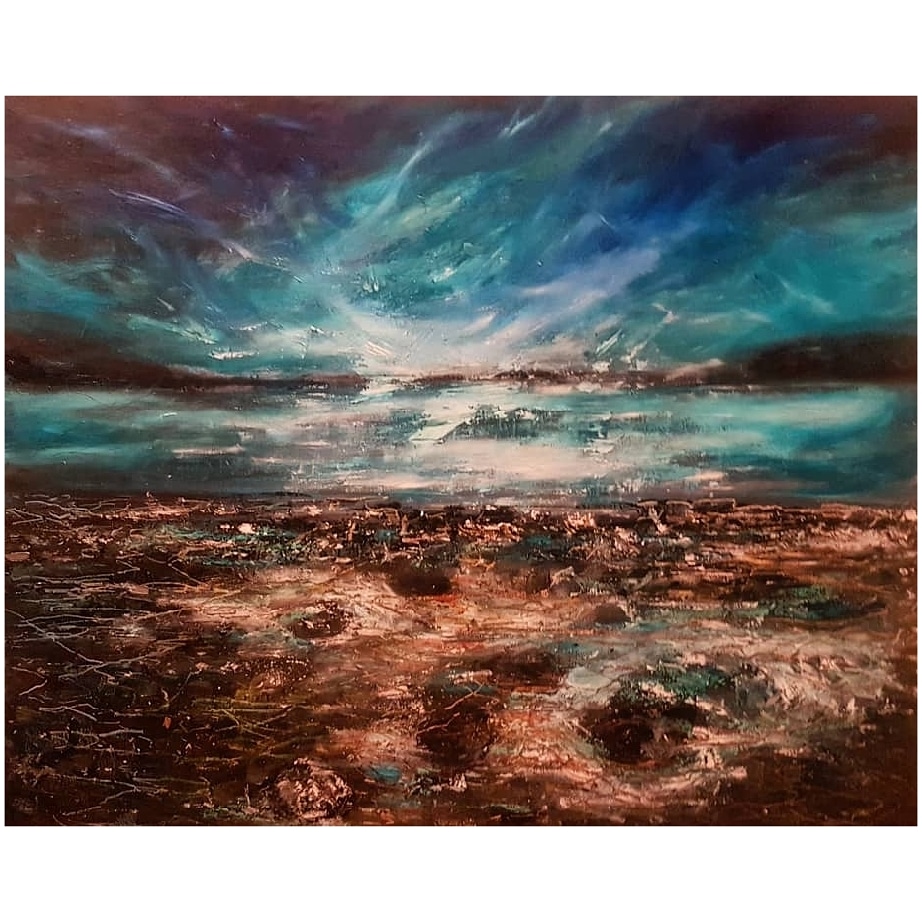 My two last questions are both about things you’ve seen, I wonder if there is another painter who you think is kind of underrated? Like someone who is due for a critical reapraisal for example, and then I wanted to ask if you would tell us about a guilty pleasure, could be another painter, but could be some other kind of media, something you love that’s kind of dumb or silly.

Ok well I wouldn’t say he’s been underrated as he’s very highly rated but rather momentarily forgotten. The Artist I’m referring to is Anselm Kiefer, who’s work is some of the most honest I have ever seen. Always searching trying to uncover deeper truths, he is as much a philosopher as he is an Artist. His painting Margarethe, created 1981 was based on the poetry of Paul Celan, who was the only member of his family to survive a concentration camp during the Holocaust. In the poem “Death Fugue”he talks of the inhabitants of the camp drinking black milk and digging graves in the sky. Two figures are contrasted in the poem and act as the central metaphor: Margarete, with her cascade of blonde Aryan hair, and Shulamite, a Jewish woman whose black hair denotes her Semitic origins, but which is also ashen from burning which we see in Kiefers painting. Kiefer was never afraid of offending his fellow Germans with his paintings during a time when most would rather forget the sins of their fathers.
Ok well to answer your last question I’ll
Say this. Why should we ever feel guilty about a pleasure?
As long as you’re not harming yourself or anyone else then I say embrace it, enjoy it. Life’s too short to worry.