BB With your work, there are conceptual questions, but I kind of want to ask  technical questions.

The process and physicality of it is so interesting, the paper wrapped around canvas seems like it would be so fragile.

Yes, it’s a nightmare actually ! I recently sold a work and it made me very nervous! but I really like playing with the idea of painting. I wanted them to signal paintings although there is no paint involved.When I show the works they are always leaning against the wall. I think I like to sort of rob painting of its authority or something or make fun of painting.

the fragility of the paintings  is reflected in the cast dog heads and paws–it reminds me a bit of Janine Antoni, who made busts of her head out of chocolate or soap

There is something entropic about them–I like the tools as much as the paintings and show them together. The paws become worn down the more they draw.

There is something violent in that. I like to use imagery or subjects that’s a bit kitsch–dogs for example.

Well when I say violent I’m referring to the worn down paws but yes , perhaps debased is closer.

What do you use to bind the charcoal together?

The charcoal mix took a while to get right. I tried crushing coal and all sorts but in the end I bashed up charcoal into powder and mixed it with dyed plaster.The mix has a consistency like porridge. and then I pour them into silicone moulds made from clay sculpted paws and heads.

Is it a  specific dog?

I suppose something closer to allegory. At the time I was thinking about how similar children and dogs were.I work in a school so I see a lot of reward and punishment driven practice and I would go home and make my dog do a trick for a treat.

The tongues are used as erasers, not as mark making instruments, there’s something kind of allegorical there, about language?

Yes I think so–something about dogs or children not being able to speak perhaps.

People talk about trying to draw like a child, like the elephants who they trained to paint

Yes I looked at these ! And apes ! 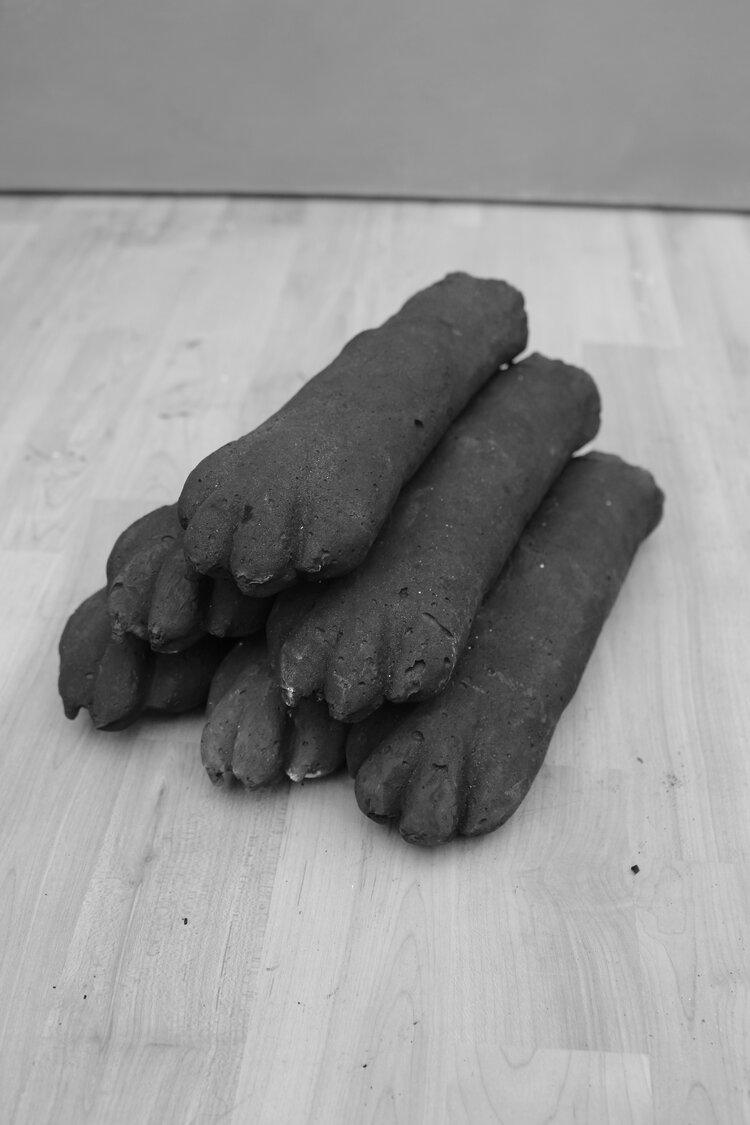 You’re going to be showing something as part of the open doors festival?

So I wont be showing anything I don’t think, but I am co-organising a show within the festival with another recent grad. We have 25 recent graduates looking to show. The festival will be operating in outdoor spaces and window spaces this year. A lot of traditional arts spaces will be playing catch up when things open up and so won’t be showing graduate work. So it’s pretty perfect timing. I like things that exist outside the institutions

Are there any other exhibitions you’ve seen recently that you really enjoyed, either in the november when things were open, or online, or in print

The last work I saw in the flesh was at the Boros collection in Berlin. It’s a collection in a massive bunker.I saw some Avery Singers I really liked which I looked at a lot when making my final year’s work.  this place is only doing tours and you have to book months in advance but I really recommend it !

I snuck in once a few years ago and got on the german tour – didn’t know a word of German but just looked at the work. On the same trip I saw a tiny Cathy Wilkes painting on a plate.

Is there an artist you like, that you think is maybe due for a critical resurgence someone who either isn’t as well known as you think they should be or who is currently unfashionable

Karen Killmnick I really love her work–her scatter installations are amazing with Sugar and things and her later paintings–I think she’s really underrated but is going through a bit of a resurgence. And one of my new favorites New York painter Joyce Pensato recently died–her work is starting to emerge a lot !

Do you know Pensato ?

I actually had no idea she died.

Yes she did this year I think… Love her work and her studio objects–these fucked up elmos walking around.

This cartoon specificity which then is sort of pushed back into conceptual abstraction through removing elements,

Yes it’s like a German expressionist got hooked on Disney

I ask people about an underrated artist but I also wanted to ask you if you’d tell us a “guilty pleasure” , something you really like, but that you think is uncool or lame

Well I was going to mention one of my tutors, Richard Walker,Did you know him?

The Guy who  paints with the lights out?

Yes, we got to go to his studio and saw him make these massive paintings – he cuts out shapes from the paintings and paints on them individually and then constructs the paintings. Eventually we saw a show of the finished works and I thought they were brilliant. I thought this show was pretty knockout he cuts the shapes out and paints on them he can brush through the forms and not stop something you can’t properly do another way I think

A guilty pleasure…Ok so the other day we did a kahoot with the kids. it’s like a quiz – anyway I discovered i’m really good with faces of actors and this comes from watching loads of trailers I think I see almost every trailer that comes out – never see the movie just the trailer And I like spotting actors from other trailers

Like Oh is that Jake Gyllenhaal or Tobey McGuire

I didn’t let the kids win the quiz haha like ah that guy is also in this thing !

“The actor who played thor” or “That  guy from saw”