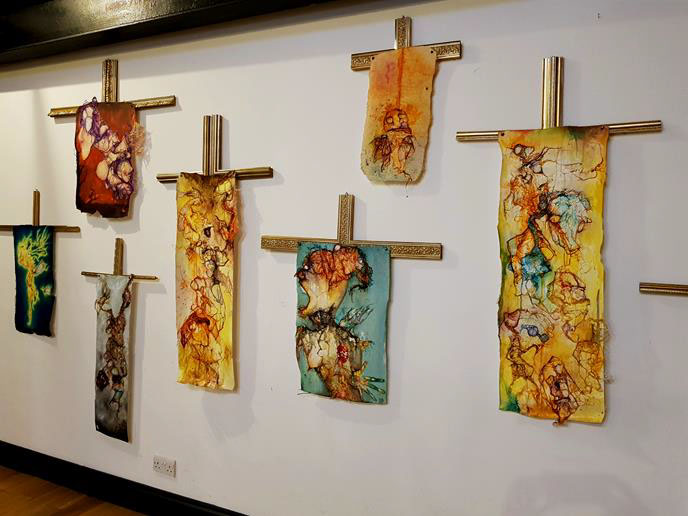 Froso Papadimitriou produces bodies of work across mediums as well as a robust curatorial practice. She spoke to us about her work as a painter and curator, the materiality of her work, and how different audiences react to the same content. Please see a short interview below.

First,Have you seen any really good painting shows lately? A follow up question, is there any artist from the past who you think is due for a critical renaissance? Either someone who was always underrated, or someone who became unfashionable who you think should get a second look?
Because you also work as a curator, I’d like to ask about the impermanence of independent exhibition spaces. When I set up group shows in the past I sometimes felt like I was throwing stones into a river, like they disappeared without a trace. But just putting a photo of your painting on the internet doesn’t seem like a good solution. Just curious if you have any thoughts or advice for how to find an audience.

One of the recent exhibitions I was very glad to visit was the retrospective show of Dorothea Tanning in Tate Modern. I am an admirer of the surrealist movement and it was very refreshing to see the work of a lesser known surrealist, however of the same importance. I loved her subject matter and symbolism, her translucent painting technique and her textural sculptures. I would give five stars if you asked me.

An artist that I think should be looked at again, as since his death he fell into obscurity, is Felix Topolski, a polish born artist who worked and died in the UK. Topolski was a man that managed to be at the right place in the right time. His work is a record of the history of the 20th century.

Just to mentioned a bit about him. He was trained in the Fine Art Academy of Poland, and in his early years visited London just before the Blitz; from there he remained in the UK and became a war artist, who while fighting in the front lines, would supply with illustrations from the battle fronts the newspapers and magazines back in the UK. After the end of the war and during his life time he published hundreds of newspapers named ‘Chronicles’, where he recorded from up close some of the historical corner stones of the century, (such as the declaration of the Indian independence and its first official government, being appointed one of the official war artist at the International Military Tribunal in Nuremberg at the trials, was commissioned by Prince Philip, Duke of Edinburgh to create a painting of the coronation of Queen Elizabeth II, in America he witnessed the civil rights protests and spend time with the Black Panthers while Martyn Luther King spend a day at Felix’s studio during his visit in London. Topolski was the artist of face to face BBC program, where he sketched the portraits of the most prominent figures of the century, while spending time with the hippie community of Eel Pie Island venue and the major hippie squat on the River Thames at Twickenham.) Until his late years Topolski continue working in his studio in South Bank, under the arches, where he created a monumental work, that of a chronological labyrinth of murals of all of the major events he witnessed during his life time.

His studio became a museum years after his death and this is where I encountered his work and also was the start of my curatorial endeavours. During my time as a volunteer at the museum, I made a proposal to the trustees to use one of the spaces of the museum as a contemporary gallery, for exhibitions inspired by the permanent collection, in order to attract a wider audience and increase the footfall. Unfortunately, by the time we received the approval the funding for the museum had been limited. Although the museum had to close its doors to the public, we (Collaborative Art, founded by myself and artist Jonathan Bradbury) managed to run a three-year long program of exhibitions in the museum, where the museum would open to the public only during our exhibition and other special events. I have to admit that we were very proud to have created a free space for artist to showcase their work in the centre of London and introduce Felix Topolski’s work to new audiences.

In 2013 the entire funding was withdrawn and the museum has now been turned into a bar, maintaining few of the paintings of Felix Topolski as deco, however stripping his work from its narrative. That was though the only way to fund a smaller storage space for the entire collection, which one can visit by appointment.

Since then, I have organised other exhibitions and projects in galleries, independent spaces and institutions. I suppose the question here is what type of audience you are after. There are various known steps we all take to bring more people though the doors such as strong mailing lists, good marketing, social media activity, budget for advertising and big names being involved in the shows but networking is at the core of it. Nowadays as an artist or independent curator one of the skills needed the most is marketing knowledge, in few cases that has taken some further than the art itself…if I dare to say. However, whilst that has allowed the art world to oversaturate, it has also given a platform for very talented artists to reach out wider audiences bypassing the tight managed gallery/curator/art dealer art market.

I do agree though with your point about art shows being ephemeral. Apart from the documentation of an exhibition, whether that is a catalogue, images and reviews, exhibitions themselves fade from memory. Except the physical publications, nowadays everything ends up on the net. It’s almost like the net is an enormous archive without locks, where you can find past information and even revive past events. I suppose its also a matter of contemporary relevance, a photo online, a mention, a good review, an interview are things that sustain one active and at the top of the search list, in a system that the turnover of information happens in seconds. 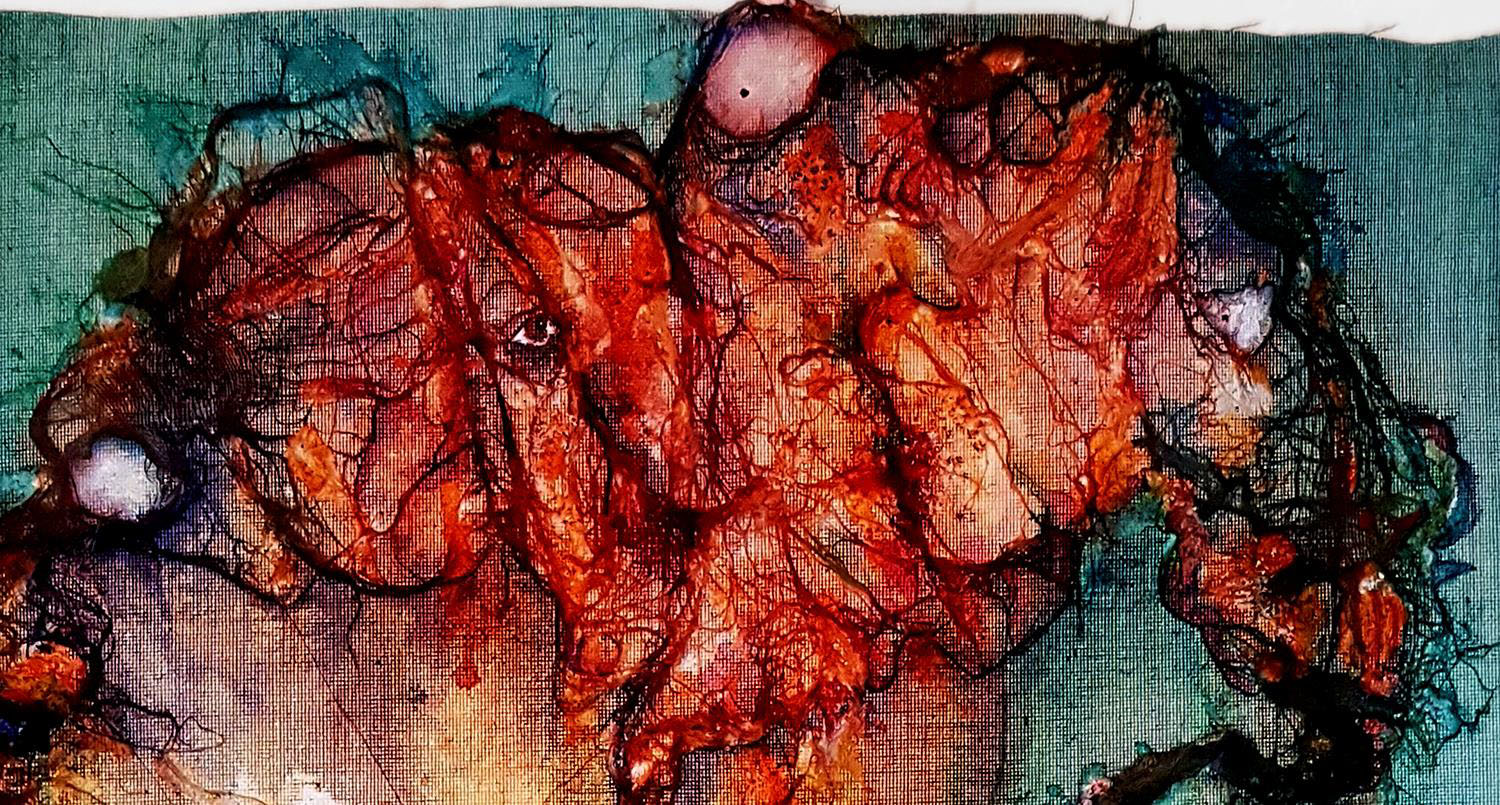 Recently you travelled to Taiwan in order to arrange an exhibition of both British and Taiwanese painters, I was wondering if you felt the context of your work changed overseas, – If the Audience reacted differently or if it truly was a different audience. I suppose the series of paintings mounted on Crucifixes would be read very differently from city to city.

The exhibition in Taiwan was designed for a specific audience. It was a collaboration with Professor Chih Fen-Chai of the art department of the National Normal University of Taiwan for the art students of the university, looking at the development of paining in contemporary art and examining the western and eastern art trends. Therefore, the majority of the work we presented was designed specifically for this exhibition.

In general, my work addresses subjects that can be of a global understanding and concern, even when the initial point of reference is location specific. I have to admit that I like to create work and leave it to the viewer to discover whether they can identify with it or not, especially nowadays were access to information is literally in our hands…or pockets.

You work quite a bit with fabric, I was wondering if you’d speak about that briefly, if you see your work in as in a lineage of textile arts, or if the question of medium seem even seems relevant these days, I’m not sure.

I suppose my work could be considered borderline with textile art but I find the requirement of categorising artworks by medium, which happens a lot when it come to art applications, very restricting in relation to the work I produce. I use a wide range of materials and operate usually with an idea that defines what medium I will use to express it, such as painting, installation or digital. However, the use of thread is more like a signature in my work. In short it represents human lives and social clusters, as a parallelism to the Greek myth of the three fates.

I suppose nowadays the artists have the freedom of choosing whether they will embrace the categorisation of their work or not, however it seems to be still relevant when it comes to institutions and funding.

I was wondering if you’d be willing to share a guilty pleasure with us, something that you really love that you think is truly dumb.

Human race hahaha (including myself) 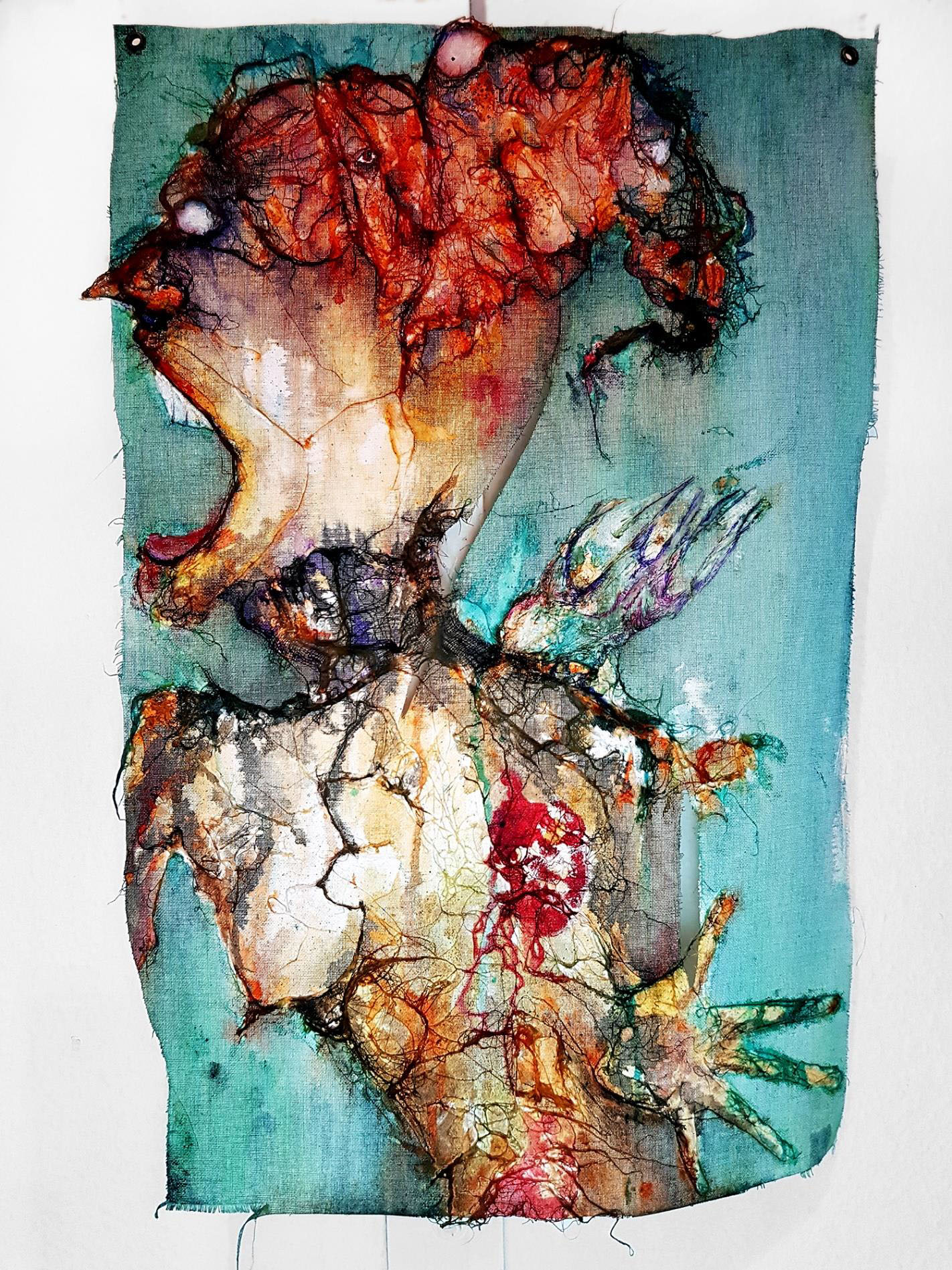 One Reply to “Froso Papadimitriou”