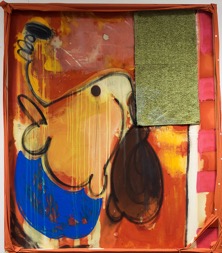 After a few months of slight activity, we have two artists to share with you.  Joel Nicholas,  a Brighton based painter was kind enough to speak with us about his subtle assemblages and the narratives they contain.  Please click through for a short interview.

First off, have you seen any really killer painting shows lately? Your work uses assemblage and found materials, so perhaps this idea of medium specificity as a criteria for a review isn’t important, what are some other great exhibitions that our readers might have missed?

I actually came across Howard Dyke recently at Ridgeway Gallery in Brixton. The one that Dom Kennedy is running. He and I got along really easily due to our work sharing a lot of the same enquiries, in respect to assemblage. We just flipping love materials that are chucked out and giving them new life. It’s a little bit of fun and can carry a new underlined meaning at the same time. That’s like a whole potential area for enquiry – the theory of how context can change meaning and re-appropriation of text being a part of that as well. I particularly enjoyed how he allowed a painting to decompose and come alive again in another form, carrying over elements of the previous form into the next in this urban-decayed collage. Especially a fan of how he’d got the Lorry tarpaulin vinyl, complete with the Ratchet straps amidst the canvas. I’m not limited to the language of materiality when it comes to what I go out to see though. Although I missed Tal R at the Hastings Contemporary – I’ve no excuse as its just along the coast from me – but his approach to mysticism and the human condition is exactly what I enjoy outside of my own experience. He’s been an influential figure in respect to seeing how a man can carry the Hebrew heritage, being born in Israel, and the Norse mindset, being brought up in Copenhagen. This is something that has carried through my journey of faith and painting; set off by the spiritual struggle that the character Athelstan has in Vikings. As a (still fairly new) Christian making art, I’m quite keen to see how stories are told and mysticism is used in paintings. I really think keeping an eye and an ear out for art that is confronting preconceptions, and unraveling unnecessary boundaries, in a humble/humorous way, is paramount for any artist making healthy art.  I’m seeking to re-contextualise the Christian faith in the cultural mindset of western society, so any shows dealing with tribalism/mythology/humanity and its rituals are good. Jess Power had some of her recent work in ‘Detritus’ as part of the Wells Projects space in Battersea. Now she’s someone to watch – definitely handling some themes that I’m interested in and excited to see it develop and engage with it. There’s almost a sense of relief when you find others making similar work that is still different. It’s like you are part of the same consciousness, finding a new way to express itself. 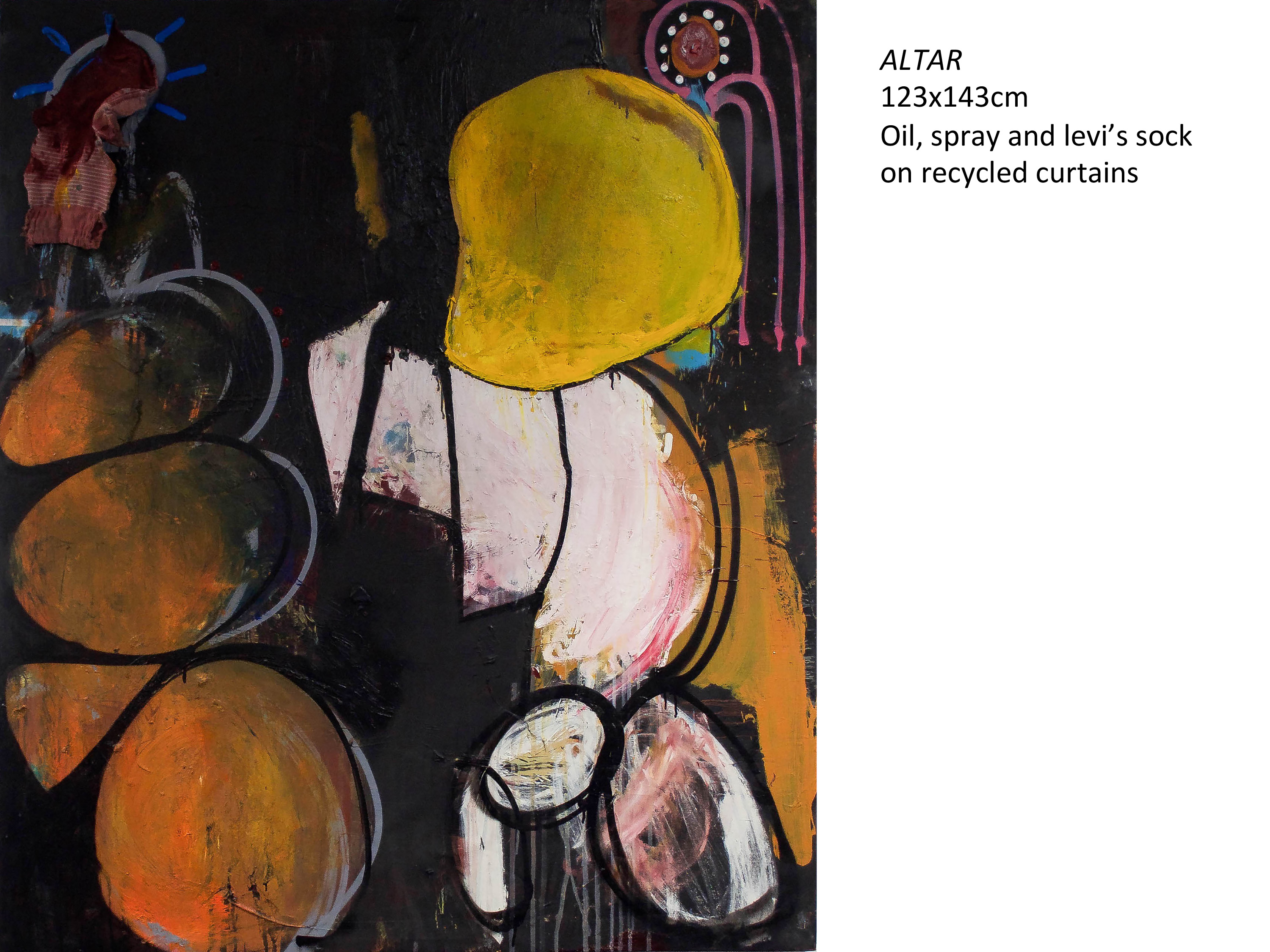 Would you speak a bit about your use of fabrics, socks and trousers that might be considered garbage. I took these initially as signifiers of domesticity, sort of gendered objects, but perhaps they are complicated by relationships to objects that can be read within the applied paint

I think there’s a lot to be said for not adding anything to this world, unless you can be sure that it isn’t just as damaging as the rest of what is being produced. If, for example, you look at the pressure being applied to fast fashion and taking more sustainable routes to bringing style to the table, you can see there’s a shift in our society’s conscience. What’s going on at the moment with how we are changing the way we view materiality and consumerism is an exciting thing, and it’s refreshing. It’s only in recent years, generationally, that we have been accustomed to everything being new and fast turn around – up until this point it seems to have been a lot more focused on longevity and altogether slower. I enjoy the shake up of challenging what we agree on as normal. I’d like to think that art is a way of giving a different time line to cultural thoughts. Not in a documentative way like Journalism or an historic account but in an otherworldly sort of way. I like the way that objects carry history and are quite complex, like you say the way they relate to the other objects within the space and applied paint. The Kuleshov effect speaks into this a bit with how meaning alters based on the order in which the eye receives information. The same frames, expressions, objects etc. all appearing completely different based on their ordering and context. I love it. Take the sock in ALTAR for example – I had no idea it was a Levi’s sock, but I used it as this signifier for a sacrifice, purely based on its materiality and colour, as if it were another form of paint – and the whole theme of the altar and sacrifice was enhanced by the fact it’s a Levis sock: there is a whole book, called Leviticus, in the bible that describes the sacrificial system ancient Israel had to go through in order to be able to sustain their relationship with their God. The tribe that was called to handle all that were the Levites, descended from Levi. I could go further in on an interpretation but, in essence, there’s meaning being pumped out of a sock in a painting. Isn’t that something? I’m not the first to do it and I’m sure I won’t be the last. But even more so worth noting: it’s on curtains and not canvas – one could go in on the link to the curtains in the temple that separated man from God and eventually were torn in two on the day Jesus got crucified. Besides the fact that it’s cheaper and more sustainable – domestic objects have this power to call to mind things that are more human and every-day and dance them around in the same space as higher thoughts and eternity. I hope that it helps dispel the idea that spirituality has to be irrational or cerebral when actually it can be a very physical thing. 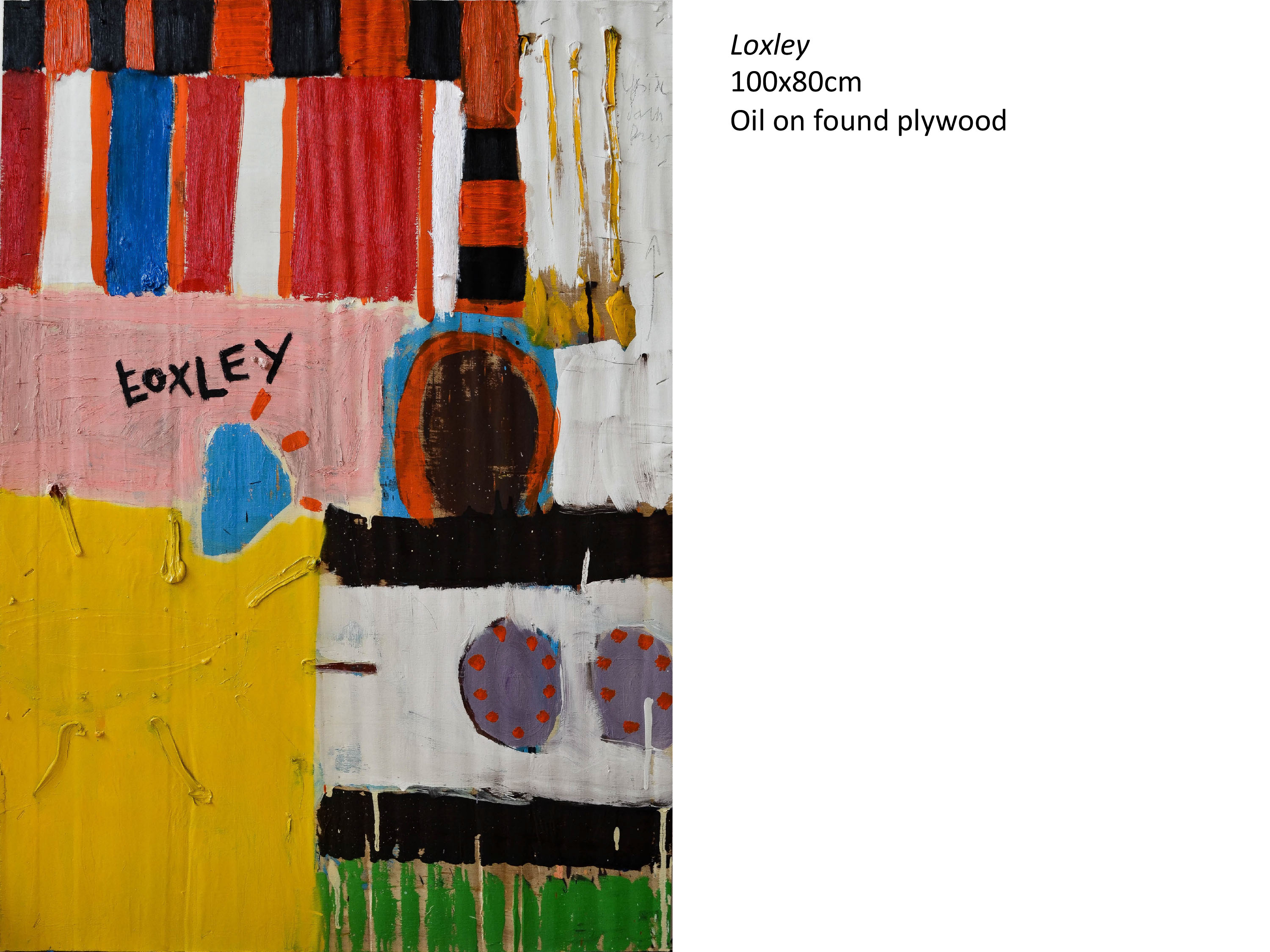 How about a lighter question, would you be willing to share a guilty pleasure with us, something that you really love that you think is truly dumb?

Bubble bath in a candle lit room of course. 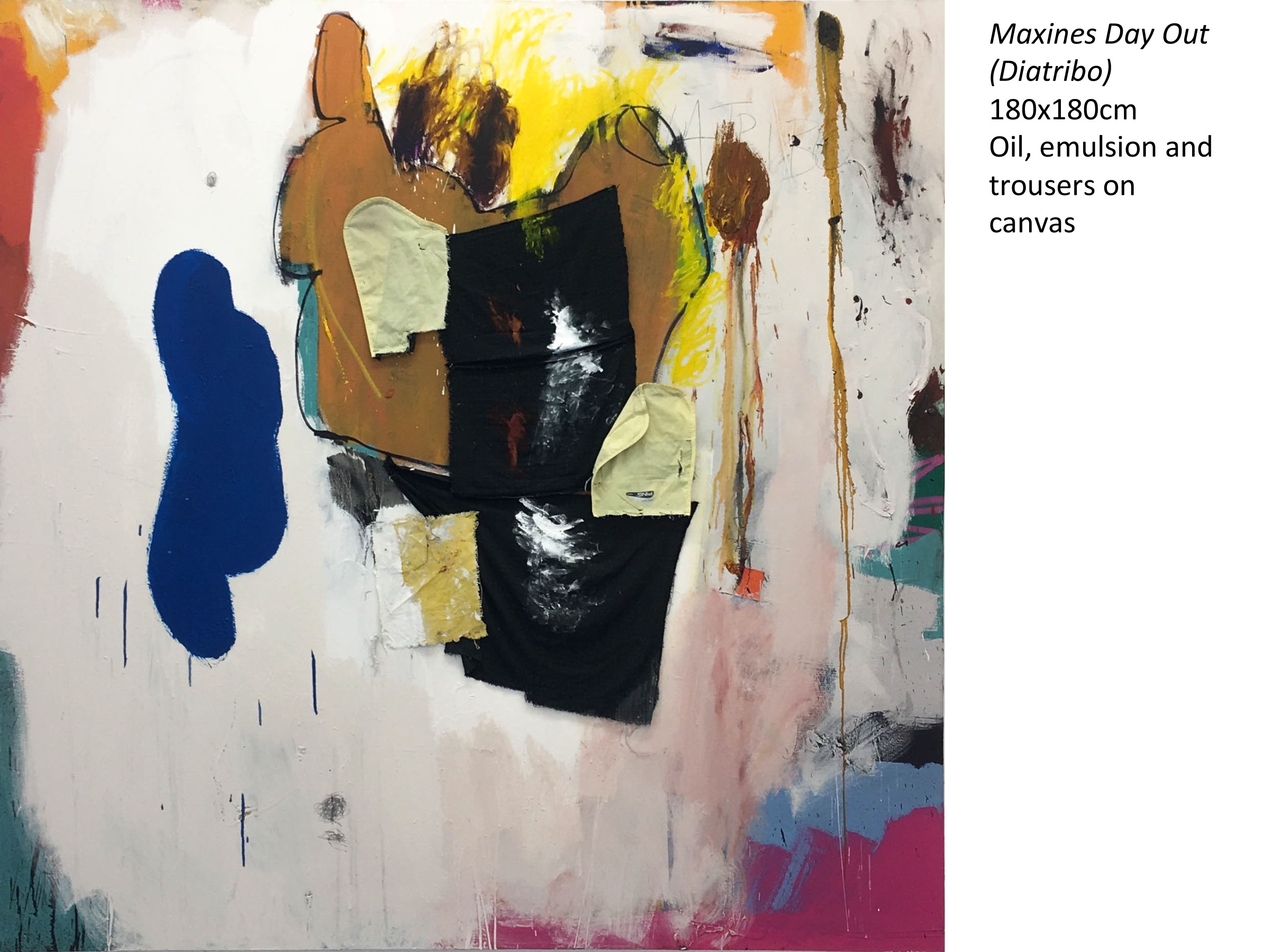 Joel is part of Vicious Circle an exhibition  at the Old Biscuit Factory,  in Londong.

Up through January 19th.